What is Gastric dilatation-volvulus?

Gastric dilatation-volvulus (GDV), often referred to as gastric torsion or ‘bloat’ by dog owners, is an acute medical and surgical emergency that, if not dealt with quickly, is generally fatal. GDV is not a single disease, but a syndrome that consists of 2 separate events, gastric dilatation (GD) and then later, volvulus. In some dogs with GDV, volvulus precedes dilatation. Gastric dilatation on its own occurs quite commonly, especially in energetic, younger dogs that are fed, scavenge or hunt and catch large quantities of food, rubbish, etc. The stomach becomes obviously distended and bloated with a mixture of the ingested materials, liquid and air, but this quickly subsides either as a result of the dog belching and vomiting, or through normal digestion. 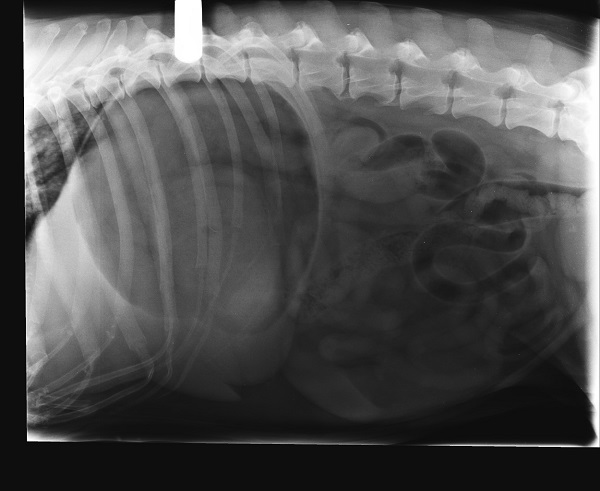 Volvulus occurs alongside GD in some dogs and refers to the stomach spontaneously undergoing a clockwise rotation of up to 360 degrees, pulling the small intestines and surrounding tissues with it. A rotation of just 180 degrees is enough to block both exits from the stomach thereby trapping its contents inside so the dog is no longer able to belch, vomit, or digest the contents normally. This twisting motion also cuts off the blood supply to the stomach and a large section of the intestines which rapidly leads to toxic shock and death within a few hours without immediate veterinary intervention. A few dogs suffer from intermittent bouts of a partial GDV where the rotation of the stomach is less than 90 degrees causing a partial and reversible blockage.

Despite decades of research, no single cause of GDV has been found. However, epidemiological studies of large numbers of dogs over many years has identified a number of predisposing factors. These ‘at-risk’ factors are listed below along with their relative importance in the aetiology of GDV in dogs.

Breed and shape: Although all dogs can potentially develop GDV, in reality it is a disease almost exclusively seen in large and giant breeds such as Great Danes, Dobermanns, Pointers, Weimaraners, Setters, Saint Bernards etc. The shape of the dog’s chest and/or abdominal cavity is also a factor where the depth is more than 1.5 times the width, that is the dog is ‘deep-chested’. This is because deep-chested dogs have longer (and therefore more stretchy) ligaments holding the stomach in place. In addition middle-aged and male dogs are more at-risk than young and female dogs, and dogs with a body score of 2/5 or less, i.e. underweight, are also at risk.

Genetics: GDV runs through family lines, the puppies of dogs that suffer GDV are at much greater risk themselves of suffering GDV as adults.

Temperament: A dog’s temperament is the combination of 2 factors, genetics and experience. Dogs that are anxious, fearful, nervous, unhappy etc. are many times more likely to suffer a GDV than dogs that are well-socialised, relaxed, playful and happy. Related to this, GDV occurs more commonly in the early hours of the morning when the dog is alone and often follows a few days after a stressful event such as being in kennels, a visit to the vets, becoming frightened by fireworks etc. The reason for this may be that in stressed dogs there is a greater degree of chronic arousal of the sympathetic nervous system and release of stress hormones that have a negative impact on the normal motility of the gastrointestinal tract (stressed people and dogs are also more prone to gastric ulcers and inflammatory bowel disease).

Lifting the dog’s food bowl off the floor: Some owners of large and giant breeds of dogs place their food bowls on chairs, tables or special stands to assist the dog in eating. This practice increases the risk of GDV, probably by increasing the rate at which the dog eats and by increasing the quantity of air swallowed with the food. At-risk dogs are better fed at floor level.

Daily feeding regime: 2 to 3 smaller meals through the day are better than one large meal. In addition, dogs that bolt their food down are more at risk because they swallow more air as they eat. Commercial ‘slow-feeding’ devices can be used in such dogs, or simply placing non-edible items into the food bowl at meal times such as smooth rocks that are too large to be ingested also slows the dog down.

Type of food: Feeding a mono-diet exclusively, i.e. using kibble only increases risk, while including some variety such as adding moist food, left-over vegetables etc., or including treats such as stuffed Kongs as part of the diet reduces risk. For dry foods, smaller kibble size (less than 5mm) increases risk while larger kibble size (greater than 30mm) reduces risk. Diets with a higher fat content also increase risk because it slows the rate of passage of food out of the stomach. As the ingredients of commercial dog food is summarised on the packaging in order of quantity, foods with animal or vegetable oils or fats listed within the first 4 ingredients should be avoided. There is NO evidence that dry dog food, or dog food containing cereals increase risk of GDV, neither is there any evidence that adding water to dry dog food decreases risk.

Water consumption: Some dogs habitually consume large quantities of water either after eating or after exercise, and this could increase the risk of developing a GDV. Likewise, some dogs drink sea water and this should also be avoided. Dogs of course need ready access to clean, fresh water at all times, but for dogs that consume large quantities all at once, this should be rationed. You should speak to your vet practice about this so they can advise you on how much your dog needs to drink each day as this will vary according to his size, lifestyle and diet.

Exercise: There is little evidence that exercise increases the risk of developing GDV. However, because dogs are more likely to swallow air when running about, panting, playing with a ball etc., common sense suggests that avoiding vigorous exercise for 3 to 4 hours after eating allows time for the meal to pass out of the stomach.

How can GDV be prevented?

Apart from understanding the factors listed above if you own an ‘at-risk’ dog, and knowing what steps to take if you suspect your dog is at the early stages of developing a GDV, considering having a gastropexy carried out by your vet is another option. Gastropexy is a surgical procedure that anchors the stomach firmly into place and so avoids, or much reduces, the possibility of volvulus in the future. This operation has no doubt saved the lives of many dogs over the years, and indeed it is carried out as a matter of routine as part of the surgical procedure for correcting a GDV. For dogs that suffer a GDV, are treated and survive, their chances of suffering another GDV is 80% higher without a gastropexy being carried out at the time of surgery. Having a gastropexy at the time of surgery reduces the risk of another GDV to less than 10%.

What are the signs that your dog may be developing a GD?

First and foremost, owners of ‘at-risk’ dogs should have a good relationship with their local veterinary practice, have their emergency telephone number close at hand and know the warning signs so they can reliably convey these to the emergency veterinary staff on duty during the initial phone call. Remember that many veterinary practices now use dedicated night-time centres to manage their out-of-hours calls. This means that they may not know you or your dog. Getting the right information across to them quickly is important. Veterinary nurses and vets are trained to work through a triage process for all emergency calls. Triage means to prioritise and manage the most serious and life-threatening signs. This process allows them to quickly identify the most serious cases, give advice to owners and take the necessary steps to prepare the emergency team so they are ready to admit the dog on arrival. So, what are the most important things you should convey on that first phone call, especially if the practice does not know you or your dog?

GDV is a very serious condition for dogs and, without immediate emergency care, it is fatal within a few hours in most cases. However, for owners of ‘at-risk’ breeds, the risks of developing GDV can be greatly reduced by taking a few simple steps in managing the dog’s lifestyle, diet and general well-being. For those dogs that are unfortunate enough to suffer a GDV, knowing what to look out for and knowing what to do will, in most cases, save the dog’s life.

If you'd like bespoke advice from our Helpline experts, give us a call on 0800 195 8000 or email helpline@oscars.co.uk or contact us and we'll call you back.

A Superior Service from OSCAR Woking

A Passion for Pets at OSCAR Pet Foods Wakefield

We’re delighted to share our passion for pets with friendly and convenient home delivery ...

A Hassle-Free Shopping Experience for Customers in Southport

In these unprecedented times, pet food is one less thing for you to worry about!